On Sunday, September 26, 2021, Westwood's founder, Francis D. Hagen Senior (aka Fran Sr.), passed away peacefully surrounded by his family. He was a devoted husband, father, grandfather, great-grandfather, and friend, and an ambitious leader and innovative engineer.

Fran was born in Aberdeen, SD in 1932. He received his civil engineering degree from Marquette University in Milwaukee, Wisconsin. Fran met the love of his life, Darleen, while attending Marquette. The two were married and soon after, Fran was drafted into the Army. After serving in Anchorage, AK for two years, Fran and Darleen moved to Milwaukee and welcomed five children before relocating and settling down in Plymouth, Minnesota.

Throughout Fran's leadership, he operated by instilling trust within his team, putting his employees first, and establishing a culture where Westwood hired the best people and then gave them the space and autonomy to do their best work. In doing so, he was confident that all else would work out. These are the values that live on in Westwood today.

Westwood's client base grew, bringing more unique projects and demand for its services. Fran led his growing team through many business milestones and achievements including diversification into surveying, transportation, and environmental services. Always an engineer and innovator at heart, Fran built Westwood's first computer (Heathkit) in 1980 to run administration tasks and clerical work for the company.

By 1987, Westwood had grown to roughly 50 employees. Fran sold his shares in the company. He enjoyed partial retirement, while supporting the City of Robbinsdale, Minnesota, as City Engineer, which evolved to Public Works Director, and eventually, City Manager.

After fully retiring, Fran kept busy volunteering at St. Joseph Catholic Church in New Hope, serving on the Board of Directors of the St. Therese Foundation, and building his dream cabin up north from the ground up.

Over the years, Fran had many hobbies. With his GI Bill, he took electronic classes and learned to build his family's console color TV, FM radio, and a first-generation computer. While his children were young, Fran was a scout leader for Troop 567 in Plymouth for almost 20 years. When his five children graduated from college and bought their own homes, Fran was there to help with just about any remodeling project, large or small.

With the birth of his first grandchild in the 1980s, Fran earned what would arguably become his favorite title: Papa. Fran cherished being Papa to his 12 grandchildren and three great-grandchildren.

When asked what trait he carries forward from his father, Fran II says, "My parents instilled love, trust, and support of their family better than anyone. We never questioned their love. This is a trait I try to instill in my children." Fran smiles when he recalls that despite his father holding a lot of responsibilities, he was a family man first, "Dad was always home for dinner. If he had to bring work home, he always put it aside to spend time with us first."

A Tribute to Fran

Fran was loved by so many. For those fortunate to have met him, Fran will be remembered for his love for telling stories and building things, and countless professional contributions to creating better communities. He demonstrated fearless curiosity and entrepreneurial spirit throughout his life which drove him to lay the foundation for what has become a successful and long-lasting business, Westwood.

For those who haven't met Fran, know that the ability to apply our professional talent at Westwood every day began with Fran's courage to realize a dream so long ago. We look forward to carrying on his legacy with pride and gratitude, and as we celebrate Westwood's 50th anniversary in 2022, let us remember Fran's dream in all we do. 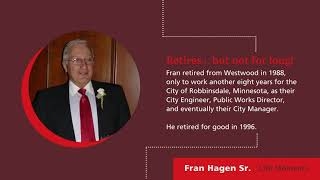 Join us in welcoming Pat Zacharie to the Legal team as Westwood’s new general counsel. With over 25 years of experience in both the public and private sectors, Pat will oversee all aspects of Westwood’s legal functions. Learn more about what this role entails.